Browse: Home   /   Beggars in the House of Plenty

Beggars in the House of Plenty 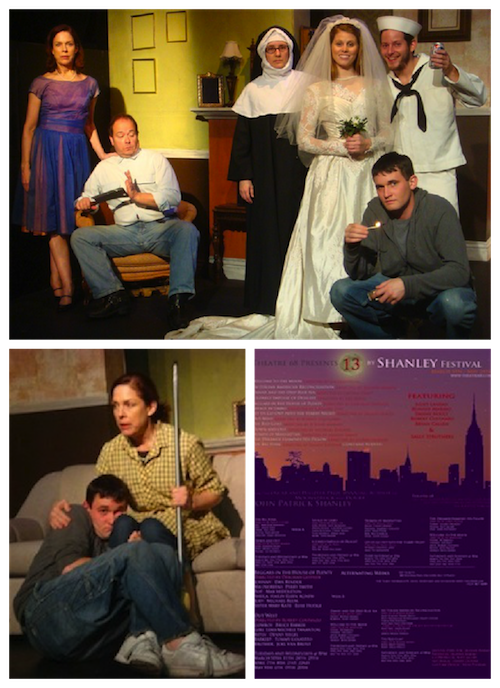 Beggars in the House of Plenty is a surreal psychological drama that plunges audiences into the darkly comedic memory world of Johnny, narrator and youngest son of a 1950’s Irish-American household. Johnny, the most autobiographical of Shanley’s characters, leads us through his disjointed family history beginning at his fifth Christmas, through his rebellious teens and into the confusing depths of adulthood, desperately searching for what happened to make him the way he is now, what his life’s purpose is, and why families like his pit themselves against one another, collapsing from the inside out.

Deborah Geffner jumped at the chance to direct Beggars in the House of Plenty. “This play spoke to me instantly. The challenge and the fun was in finding the tempestuous family dynamics behind the seemingly disjointed dialogue, and communicating this to the actors so that they could make it utterly understandable to the audience. It’s inspiring to see how courageously they have allowed themselves to go to these heart-rending places. And as a result, each time the lights come up, I see men and women wiping tears away from under their eyes. One said to me, “That final image of the play will be seared in my mind for the rest of my life.” What a privilege and joy to be involved with something at once so funny and so hauntingly powerful.”

Praise for John Patrick Shanley’sBeggars in the House of Plenty directed by Deborah Geffner at Theatre 68’s “13 by Shanley” Festival in Hollywood:

“What a difference a director and cast can make!

When I saw a production of John Patrick Shanley’s BEGGARS IN THE HOUSE OF PLENTY about four years ago, I found myself squirming in my seat waiting for it to end. I couldn’t make head nor tail of what was going on as the play got more and more bizarre and heavy-handed. My guest and I looked at each other when the lights went back up and said almost simultaneously, “Now what was that about?” Arriving home, I did some googling and saw that at least one reviewer had raved about the production, leading me to wonder what she had seen in it that my friend and I had not.

Cut to earlier this year when I was invited by an actress friend to see a production of BEGGARS that she and her husband were mounting. Thinking to myself, “No way I’m sitting through that another time,” I politely declined the invitation. The production garnered some great reviews, but recalling my first experience with it, I felt I had probably still made the right decision.

Not long after that, Theatre 68 began its historic 13 By Shanley festival. I ended up seeing four of the festival’s seven full-length plays and enjoyed every one of them. One which I passed on was, not surprisingly, BEGGARS IN THE HOUSE OF PLENTY, despite an invitation from director Deborah Geffner to give her take on BEGGARS a chance.

The 13 By Shanley festival turned out to be quite possibly the 99-seat theater event of 2009, its initially scheduled three-month run extended to five. Searching several weeks ago for a Wednesday show to review, what should pop up but—you guessed it – BEGGARS IN THE HOUSE OF PLENTY? There not being anything else to choose from, I thought back to Deborah’s passionate defense of her production and decided, What the heck? The worst that could happen would be that I could say, “See, I told you so. I really don’t like that play!”

Wrong! With egg on my face, it is now time for me to eat my words.

Geffner and her superb cast did indeed have a fresh take on Shanley’s surreal semi-autobiographical tale of a young man growing up in a family the epitome of dysfunctional. Eschewing a sledgehammer approach for a lighter, more whimsical one, and with an absolutely enchanting cast of actors, Theatre 68’s BEGGARS IN THE HOUSE OF PLENTY charmed, engrossed, and moved me as I had no expectation of being charmed, engrossed, or moved.

It helps that I understand “early Shanley” better now than I did four years ago—thanks to the other festival plays. I’ve begun to “get” his poetic, stagey, non-linear storytelling in a way that I didn’t before, and Geffner has directed Beggars with the same whimsical brand of quirkiness that can be seen in Theatre 68’s productions of ITALIAN AMERICAN RECONCILIATION and THE BIG FUNK. The family depicted in BEGGARS is screwed up beyond belief to be sure, but Geffner sees them in much the same way Augusten Burroughs did his f—ed up family in RUNNING FOR SCISSORS, proving that what may have been hell for a writer to live through does not have to be hell for an audience to sit through!

Act One introduces us to the Irish-American family of our protagonist Johnny (Dan Bender), whom we first meet as an adult-sized five-year-old dressed in one-piece kiddy pajamas and a 1950s child-sized red cowboy hat. His Ma (Perry Smith) is a downtrodden housewife, his Pops (Max Middleton) a bullying slaughterhouse worker. Older brother Joey (Michael Blum) is a sailor back on land after voyaging “all over the world” and older sister Sheila (Hailey-Ellen Agnew) is about to escape the family chains through marriage. Completing the family album is Sister Mary Kate (Elise Hodge), the family’s obligatory Catholic nun.

Shanley moves forward and backward in time, his characters occasionally revealing what’s ahead for them in life, as when Sheila tells Johnny, “I’ll have my husband Ray, and my own children. And when you come and see us, I won’t care about you very much.” And what a vivid cast of characters Shanley has created! Pops is a vicious S.O.B. who once punched son Joey “right in the face” when Joey said the F-word, and who boasts that after telling a doctor to “rip (my hemorrhoid) out, rip it the hell out before it multiplies, … I haven’t had a god damn hemorrhoid since,” a point which he illustrates with the meat cleaver he always keeps on hand. Ma is a lifelong complainer: “There’s laundry I gotta do today just like any. Always more laundry. And there’s a bum down (in the cellar) I smell. I gotta do laundry and throw out the bum.” Sheila delights in showing off the wedding dress she’s taken to wearing around the house, exclaiming “This is so exciting! Everything is so exciting! I’m the center of everything!” Full-of-himself Joey lies, cheats, and steals and is proud of it because “women love a bad boy,” yet cannot seem to win the love of a father who tells him almost proudly that “it’ll haunt you all your life, this thing between us.” Sister Mary Kate is a jolly sort of nun, yet not averse to speaking her mind, as when she tells Sheila, “Self-praise stinks, dear,” or when she raps Johnny’s knuckles upon learning that he’s been setting fires. “That’s the Devil’s job,” she explains, before poking him for emphasis.

The play’s second act focuses on Johnny’s relationship with Joey, the older brother he idolizes. We learn about Johnny’s habit of lying, of setting fires and smashing windows, behavior that is less common for him these days because “now I have language at my disposal,” a hint that like Shanley, he too may have writing in his future. Joey has by this time “seen some shit in The Nam,” shit that he doesn’t like to talk about but which has colored his life since then. Johnny too has, in Shanley’s unique, poetic voice, “licked the water off the underside of every leaf in this fucking desert.”

Finally, in the play’s last act, the spotlight is on Johnny and his Pops, who appears in a red light like a demon from hell. Why, Johnny wonders, did he and his father have to be “set against each other,” and why, when “the table was full, the places were laid, (and) everything we needed was there,” did he have to be like one of the beggars he sees in the street and wants to kick in the face “cause that’s me! Pathetically waitin’ with my fuckin’ cup.” Johnny rages at his father, “I will never think of you without being shocked by your lovelessness!”

Even as the play steadily darkens, Geffner never loses sight of its inherent humor, thereby avoiding a drastic tonal shift in the cathartic third act. In fact, though ultimately I would classify BEGGARS IN THE HOUSE OF PLENTY as a drama, the laughs come fast and furious in the first act and even to a certain extent in the second, and like a number of other Shanley plays, the laughter comes from the performances rather than from the writing itself, or rather it is hidden inside Shanley’s dialog just waiting for the right group of actors to make it sparkle.

Bender is simply stupendous as Johnny. At first cheek-pinchably adorable as a 5-year-old who finds having double-pneumonia an achievement to be boasted about, Bender then becomes heartbreakingly real as an adolescent whom adults wanted “dead, broken, ruined, expunged.” Finally, letting out all his rage, the actor reveals a grownup son at last capable of fighting back against his “old man.” Bender’s is a performance of many layers and many shades and one that grows steadily richer and more powerful as the play progresses.

A trio of outstanding supporting players do absolutely beautiful work in their very challenging roles. An outstanding Middleton tempers Pops’ ferocity with humor, making the patriarch less a monster than simply a flawed human being. As Joey, Blum gives a firecracker of a performance, the neighborhood Casanova whose life experiences have turned him into a man who could snap his brother’s neck and enjoy it. Smith is a total delight as a housewife-&-mother never without a chore to take care of or a complaint to voice. (“My feet are killing me. All the Fitzgerald’s got these feet, and I’m a Fitzgerald.”) When we later see her transformed into the beautiful young woman Pops had fallen in love with, the effect is at once startling and moving. Assistant director Agnew and Hodge both do excellent work in their smaller parts.

Ultimately, it’s first-time director Geffner’s vision that makes this BEGGARS IN THE HOUSE OF PLENTY work so well, where others may not have. Blessed with a sextet of actors who simply could not be better, and with an understanding of just what makes Shanley’s voice so unique, she has put together an truly splendid production, and one which turned me from a BEGGARS hater to a BEGGARS lover in the space of an hour and a half.”